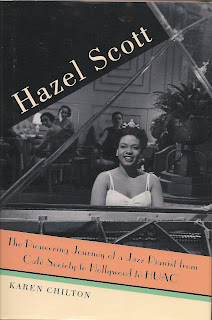 Hazel Scott: The Pioneering Journey of a Jazz Pianist from Café Society to Hollywood to HUAC. By Karen Chilton. Ann Arbor: The University of Michigan Press, 2008.
This recently published book sheds new light on the complex issues of racial, ethnic, and gender conflict in mid-century American jazz and entertainment industry history by focusing on trailblazer Hazel Scott, while providing new information on some key figures.
Hazel Scott (1920-1981) was a pianist, singer, composer, arranger, actress, and civil rights leader—an extraordinarily talented, dynamic, and gorgeous woman with phenomenal success as an original cross-over artist, bridging classical music, jazz and music for Hollywood films (playing herself). She challenged and broke down some of the barriers (racial and gender) of the times with her hurricane- force personality and power, but at a considerable personal cost. Scott was like a high-wire trapeze artist who performed without a safety net. The audacious Scott became an international super star at a rather young age and then descended rather rapidly to obscurity. By 35, she was broken, full of self-doubt, depressed, and suicidal. Sometimes it is just too hard to be the first and only. Hazel Scott was a woman of great dignity and personality, with backbone and grit, but not without personal contradictions.
New York-based writer-actor, Karen Chilton is the coauthor of I Wish You Love, the jazz memoir of vocalist Gloria Lynne. Chilton’s own preparation as a classical pianist at the American Conservatory of Music in Chicago proved to be great asset in her work on Hazel Scott. An audio version is also available of this biography.
Although essentially a celebrity biography, this book contains detailed accounts of the “Jim Crow” discrimination she encountered in Texas, State of Washington and in Washington, D.C., among other placed. Originally from Trinidad, her family relocated to Harlem in New York City in the 1920s. A child prodigy, she auditioned at Juilliard School at 8 years of age, at 14 played Town Hall, and by fifteen was on the same bill with Count Basie at Roseland Ballroom. She knew and worked with Billie Holiday, Art Tatum, Fats Waller, and Lester Young. First appearing in 1939 at the age of 19 at the Café Society (recommended to Josephson by Billie Holiday), she was a standard on the bill there where she played her jazz renditions of music by Chopin, Bach, and Rachmaninoff. She worked in Hollywood where she challenged the studios’ treatment of black actors.
Her complex and tumultuous marriage in 1945 to controversial Harlem minister and black congressman Adam Clayton Powell, Jr., was widely covered in the press. She refused to perform for segregated audiences, and an outspoken advocate for civil rights. Stunningly beautiful and very sexy, she played with abandon and freedom that was tantalizing and exhilarating (Some of her film clips can be seen on www.youtube.com, if you have never seen a Hazel Scott performance.) She joined the expatriate community in Paris after her dealings with the House Un-American Activities Committee during the McCarthy era. Scott asked to appear before HUAC and made some statement that implicated others, including Barney Jospehson. This book provides a lengthy account of the situation and Scott’s position. Many of her old friends and associates felt she was guilty of “naming names” in her testimony and ostracized her.
This is an authorized and uncritical biography, but a major contribution to African American and gender studies in music, made possible by Hazel Scott’s son, Adam Clayton Powell III, who provided Chilton photographs, recordings, and Hazel Scott’s journal writings which Hazel Scott had hoped to turn into a memoir she intended to title “Scott Free.” Many things are stated as fact in the book cause one to react, “According to whom? Who says?” Many things that Hazel Scott wrote in her diaries represent only her opinion, perspective, or spin, but may not be entirely truthful or factually accurate. Additional research to collaborate what was found in Hazel Scott’s personal papers and diaries is in order. But for now, at least we have Hazel Scott’s perspective on her own and dramatic high-flying life. One hopes that the primary sources upon which this book is based will find their way into a research collection and be made accessible to others interested in Hazel Scott. Although the book is indexed, contains some fascinating photographs, and includes a discography, filmography, and bibliography, it does not include a list Hazel Scott’s compositions (including her ingenious arrangements). One hopes that this book will inspire other scholars in jazz, women’s studies, and African-American history to take a closer look at Hazel Scott’s legacy and realize that there is more to the story than a prodigy who seemed to many to be her own worst enemy.
Posted by Jeannie Gayle Pool at 6:31 AM No comments: 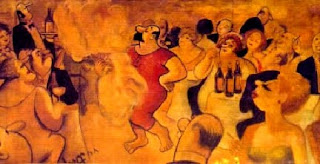 To supplement my recent post on the biography of Barney Josephson, I wanted to let you know about Syd Hoff's FAN DANCE.   In the book, Cafe Society (reviewed below) there is a reproduction in black and white of the mural by Syd Hoff which was created for the original Cafe Society in the late 1930s.  When I saw the reproduction in the book, I said to myself, "Hey, I know that work!"  It hangs in my favorite Mimi's Restaurant on Los Feliz Blvd. in Los Angeles and I love to eat in that room so I can enjoy viewing the work. So how did this piece of art end up in Los Angeles, I wondered?  My friend, Michael Sheehan, did some research and found a website dedicated to Syd Hoff (http://www/sacreddoodles.com/SydHoff/pages/mural.html).  Syd Hoff's niece, Carol Edmonston, who lives in Fullerton, California, also wondered why the reproduction of this mural was in the Mimi's Cafe in Tustin and eventually figured out that the 5' x 10' reproduction is found in 44 of the 116 Mimi's Restaurants throughout the United States.  She contacted Mimi's and asked that they credit her uncle Syd (1912- 2004), for the art work, so now there is a plaque next to each of the 44 reproductions crediting Syd Hoff.  Hoff, you may know, wrote Danny and the Dinosaur, a very famous children's book, but he was also a prolific cartoonist for The New Yorker.  There is still a mystery to solve about the location of the original piece of art and how the mass production of the piece was accomplished (without his signature).  Perhaps you have a clue to share with Carol Edmonston?  Perhaps you share my love of Syd Hoff's work?
Posted by Jeannie Gayle Pool at 10:08 PM No comments: