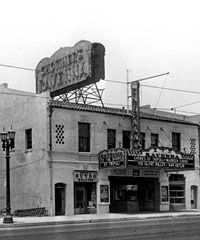 The band’s first extended job was performing at the Ravenna Theater from June 17-September 19, 1925. The theater was also known as the Chotiner’s Hollywood Ravenna, seating for 798 people, was located at 233 N. Vermont Avenue. The architect was Richard D. King. The band played at the beginning of the show followed by an accompaniment for the newsreel. Then the Wurlitzer pipe organ would take over so the band could prepare for its big featured performance.
The opening souvenir program booklet for The Ravenna indicated that Max Chotiner was the President; H.W. Chotiner was the Secretary-Treasurer and the General Manager was H.W. Woodin. According to cinematreasures.org, the theater which had a single screen was at one time owned and operated by Fox.
The program booklet published the earliest photograph of the band and listed it as “The Orchestra” with this description:
“Babe Egan’s Ravenna Redheads; Exponents of Classical and Popular Music. Nowhere in Sunny California will you find a musical organization such as this. Miss Egan, widely and very favorably known on every vaudeville circuit of the country, has long been designated as 'Queen of Syncopation,' therefore the Ravenna patrons are to be congratulated on the stroke of good business that secured the services of Miss Egan and her Redheads."
Band members included Mildred Stevenson; Dorothy Sauter, Edith Griffith, Juanita Klein, Estelle Dilthey, Bottom row, Elva MacNair, and Anne Rehnborg. I would enjoy hearing from anyone who remembers this theater or heard Babe Egan's band.
Posted by Jeannie Gayle Pool at 9:27 PM 1 comment: