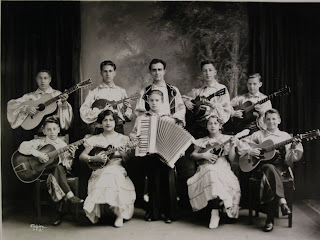 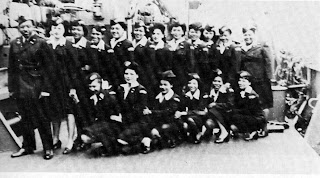 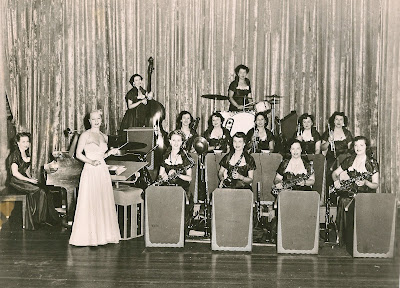 For the record, this is Ina Ray Hutton's band in Los Angeles, probably from the early 1950s (perhaps when they were on KTLA), and (I believe) the band members are, from left to right: DeeDee (Glee) Ball (piano), Ina Ray Hutton (singer and bandleader) , Karen Donley (bass), Norma Peterson, Toby Gorlick, Naomi "PeeWee" Preble (trombone), Marcella Anderson, Dody Jeshke (drums), Helen Kay (trumpet, later Helen Kaplan), Audrey Hall Petroff (saxophone), Jane Sager (trumpet), Joanne Wooley (trumpet) and Evelyn Madson (saxophone).  Ina Ray Hutton was born in 1914 and died in 1984.  If you have additional information about this photograph, I'd love to hear about it.
Posted by Jeannie Gayle Pool at 8:47 PM 9 comments: 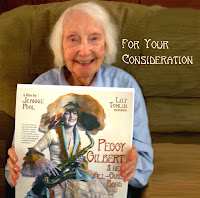